SOLEMNITY OF THE NATIVITY OF SAINT JOHN THE BAPTIST 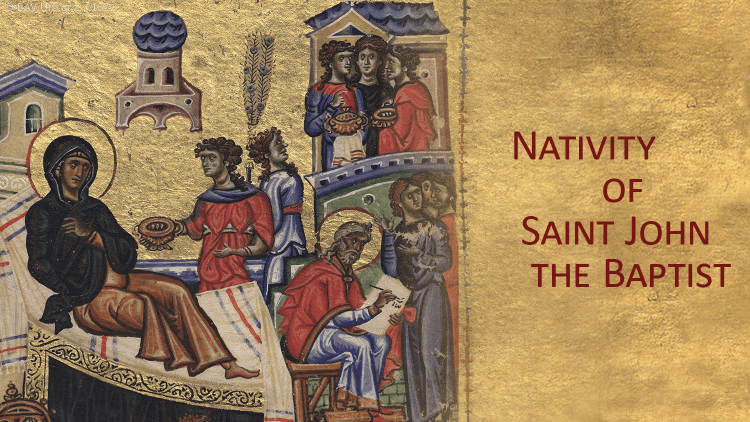 Today the Church celebrates the Solemnity of the Nativity of Saint John the Baptist, and on 29 August, we will celebrate the memorial of his martyrdom. There is no other saint for whom the Church celebrates both of these moments. Generally, it celebrates only their “birth into heaven”, with the exception, of course, of Jesus, the Son of God (25 December – his birth; and Good Friday – his death) and the Virgin Mary (8 September – her birth; and 15 August – her Assumption into heaven).
Jesus himself said, “Amen, I say to you, among those both of women there has been none greater than John the Baptist” (Mt. 11:11). He was the last of the great prophets of Israel, the first to testify to Jesus, who initiated a baptism for the forgiveness of sins and, in this context, baptized Jesus; he was a martyr who died defending the Judaic law.
As early as the 4th century, we find a liturgical commemoration for Saint John the Baptist celebrated on a variety of dates. The date of 24 June was established based on Lk 1:36a where speaking of Elizabeth it says, “this is the sixth month for her who was called barren”, therefore, six months before Christmas. Since the 6th century, this Feast also had a vigil.

When the time arrived for Elizabeth to have her child she gave birth to a son. Her neighbors and relatives heard that the Lord had shown his great mercy toward her, and they rejoiced with her. When they came on the eighth day to circumcise the child, they were going to call him Zechariah after his father, but his mother said in reply, “No. He will be called John.” But they answered her, “There is no one among your relatives who has this name.” So they made signs, asking his father what he wished him to be called. He asked for a tablet and wrote, “John is his name,” and all were amazed. Immediately his mouth was opened, his tongue freed, and he spoke blessing God. Then fear came upon all their neighbors, and all these matters were discussed throughout the hill country of Judea. All who heard these things took them to heart, saying, “What, then, will this child be?” For surely the hand of the Lord was with him. (Lk. 1:57-64).

The people were amazed because of this child, as well as by this sterile couple, who were advanced in age, who had a son. Their wonder was illuminated by faith. This is why they “took to heart” what they had heard and what they saw, and they praised God. Their amazement was accompanied by the awareness that they did not understand everything: “What, then, will this child be?” This is a legitimate question since if they had understood everything, God would not have been a part of it!
“The birth of John the Baptist is surrounded by a joyous sense of wonder, surprise and gratitude…. The faithful people sense that something great has occurred, even though it is humble and hidden…. The people are able to live the faith with joy, with a sense of wonder, of surprise and of gratitude. Do I feel a sense of wonder when I see the Lord’s works, when I hear about evangelization or the life of a saint?… Am I able to feel the Spirit’s consolation or am I closed?” (Pope Francis, Angelus, 24 June 2018)

Those who were present for his circumcision want to give the baby his father’s name, Zechariah. But something out of the ordinary happens – Elizabeth intervenes and says his name must be John. This was the name that God himself had indicated through the angel: “Do not be afraid, Zechariah, your prayer has been heard. Your wife Elizabeth will bear you a son, and you shall name him John” (Lk. 2:13). Zechariah had at first demonstrated unbelief toward God which left him mute. Now, obeying God’s request – you shall name him John – a new story began.

The text makes us understand what has opened up. An old, barren woman gives birth to a son; an old mute man speaks. These two signs attest that where things seem impossible, God always holds a possibility in store as the prophet Isaiah recalls: “See, I am doing something new! Now it springs forth, do you not perceive it?” (Is. 43:19)