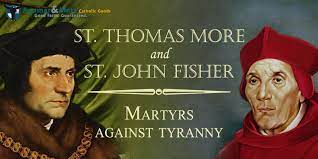 The USCCB begins Religious Freedom Week on June 22, the day when the Church celebrates the feast day of Sts. Thomas More and John Fisher.

Sts. Thomas More and John Fisher were Renaissance men.  Talented and energetic, they contributed to the humanist scholarship of early modern England.  More wrote theological and philosophical treatises, while making a career as a lawyer and government official.  Bishop John Fisher worked as an administrator at Cambridge, confronted the challenge Martin Luther presented to Christian Europe, and most importantly served as Bishop of Rochester.  As a bishop, he is notable for his dedication to preaching at a time when bishops tended to focus on politics.  These men were brilliant.  They both corresponded with Erasmus, who helped Bishop Fisher learn Greek and Hebrew, and who also famously referred to More as a man for all seasons.

Above all their accomplishments, these men bore witness to a deep faith in Christ and his Church.  More considered joining religious life and was assiduous in his devotional practices.  As a married man, he committed himself wholly to his vocation as a father.  At the time, disciplinary practices with children tended to be severe, but More’s children testify to his warmth, patience, and generosity.

St. John Fisher was a model shepherd and demonstrated remarkable humility.  He remained in the small Diocese of Rochester his entire episcopal ministry, devoting himself to his local church rather than seeking promotion to a larger, more powerful diocese.

More and Fisher are well-known for opposing King Henry’s divorce.  Ultimately, it was their refusal to sign an oath of supremacy that led them to be executed.  King Henry VIII claimed to be the supreme head of the Church in England, asserting sovereign power over English Christians.  Neither Fisher nor More could abide this claim, and their steadfastness to their consciences put them in conflict with the king.  They were convicted of treason.

It is good to love one’s country, but ultimate loyalty is due only to Christ and his kingdom.  Sts. Thomas More and John Fisher show us what faithful citizenship looks like.  They loved and served their country.  In the moments just before his execution, More is said to have stated, “I die the King’s good servant, but God’s first.”  They never rose up to incite rebellion or foment revolution.  They were no traitors.  But when the law of the king came into conflict with the law of Christ, they submitted to Christ.  These men gave their lives for the freedom of the Church and for freedom of conscience.  They bear witness to the truth that no government can make a claim on a person’s soul.  May their example continue to illuminate the path for us, as we seek to faithfully serve our Church and country.

We ask for the intercession of Sts. Thomas More and John Fisher, that we too would be good servants to our country, but God’s first!