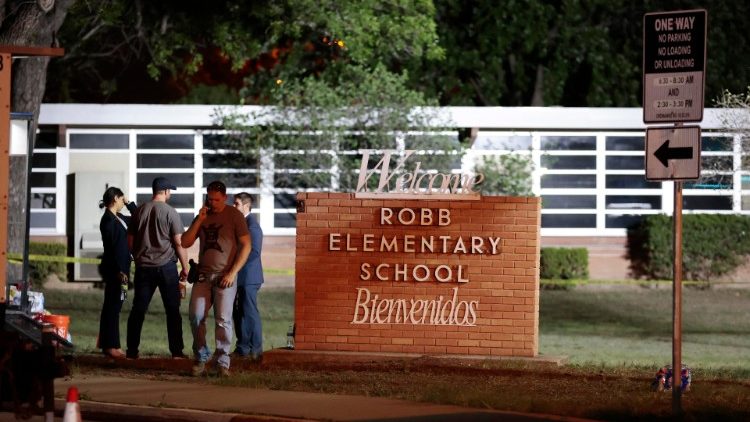 Pope Francis calls for an end to the indiscriminate trafficking of arms on the day after 19 children and two teachers were killed in a mass shooting at an elementary school in the US state of Texas.

The lives of 19 innocent children were taken on Tuesday when an 18-year-old gunman entered the Robb Elementary School in Uvalde, Texas, a town about 130 km west of San Antonio where he launched a rampage that also took the lives of 2 teachers.

The suspect, identified as Salvador Ramos had already shot his own grandmother before storming the school. He was later killed by law enforcement officers.

Uvalde Memorial Hospital said 15 students from Robb Elementary were treated in its emergency room, with a number transferred to San Antonio for further care.

This latest mass shooting has shocked people in the United States and beyond.

In an appeal during his Wednesday General Audience, Pope Francis said his heart was broken at the loss of innocent lives.

“I am praying for the children and adults who were killed, and for their families. It is time to say enough to the indiscriminate trafficking of arms. Let us all commit ourselves so that such tragedies can never happen again.”

Cardinal Cupich: we must weep but then we must act

In a statement on the carnage, Cardinal Blase J. Cupich, Archbishop of Chicago, said:

“We don’t yet know whether the Uvalde gunman took advantage of ‘permitless carry,’ but we do know that America is awash in guns. We have more firearms than people,” he said.

“As I reflect on this latest American massacre, I keep returning to the questions: Who are we as a nation if we do not act to protect our children? What do we love more: our instruments of death or our future?”

The Cardinal noted that mass shootings have become a daily reality in America today, recalling that just last week dozens of people fell victims to such events.

“The size of the crisis, and its sheer horror, make it all too easy to toss up one’s hands and declare: Nothing can be done. But that is the counsel of despair, and we are a people of hope. What do we hope for our children?” he said.

“We must weep and soak in the grief that comes with the knowledge that these children of God were cut down by a man who was just a few years their senior,” Cardinal Cupich continued and then issued an urgent appeal: ” But then we must steel ourselves to act in the face of what seems like insurmountable despair.”

He pointed out that gun safety measures make a difference, and that a 2021 Northwestern Medicine study found that the Federal Assault Weapons Ban prevented 10 mass shootings during the 10 years it was in effect.

“Researchers also determined that if the ban had remained in place in the years since it was allowed to expire, it could have prevented another 30 public mass shootings that killed 339 people and injured 1139 more,” he continued.

“The Second Amendment did not come down from Sinai. The right to bear arms will never be more important than human life. Our children have rights too. And our elected officials have a moral duty to protect them.”

Responding to news of the shootings the Conference of Catholic Bishops (USCCB) said: “There have been too many school shootings, too much killing of the innocent. Our Catholic faith calls us to pray for those who have died and to bind the wounds of others, and we join our prayers along with the community in Uvalde and Archbishop Gustavo García-Siller. As we do so, each of us also needs to search our souls for ways that we can do more to understand this epidemic of evil and violence and implore our elected officials to help us take action.”

Authorities said the suspect in Tuesday’s killings acted alone. Texas Governor Greg Abbott said that the shooter was apparently killed by police who confronted him at the school, and that two officers were hit by gunfire, though the governor said their injuries were not serious.

This latest mass shooting comes just 10 days after another 18-year-old opened fire at a grocery store in a predominantly black neighbourhood in Buffalo, New York.

Tuesday’s shooting was the worst at a U.S. school since a gunman killed 26 people, including 20 children, at Sandy Hook Elementary School in Connecticut in December 2012. In 2018, a former student at Marjory Stoneman Douglas High School in Parkland, Florida, killed 17 students and staff.