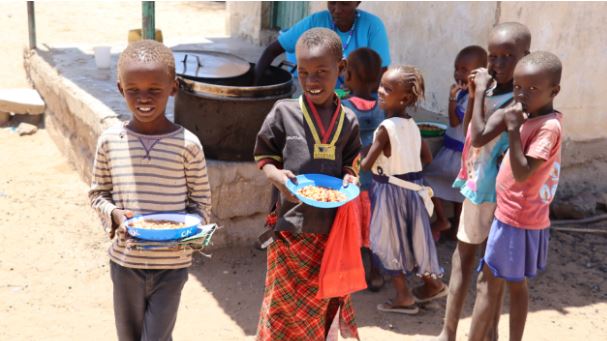 Kids in need getting nourishing food and an education? That’s the kind of good news that should be making headlines!

Some days it feels as though hardly anything but bad things happen in the world. The news is constantly full of awful stories of evil and power-hungry behavior.

But it’s incredibly heartening when you hear some good news for a change.

The best news I’ve heard this month is that Mary’s Mealsis expanding to the Turkana region of Kenya, where drought has made famine a threat.

Mary’s Meals is a global movement that sets up school feeding programs in some of the world’s most vulnerable communities, where conflict, poverty and hunger often prevent children from gaining an education. And yes, it is named after and inspired by Our Lady!

A story at Christmas time about kids in need finally getting nourishing food and an education? If you ask me, that’s the kind of good news that should be making headlines. The heroic and generous efforts of the team at Mary’s Meals stands in direct contrast to the selfish and cruel stories that fill so much of the news cycle.

I had the chance to catch up with Magnus MacFarlane-Barrow, the visionary founder and CEO of Mary’s Meals. Here’s our conversation.

Why is Mary’s Meals expanding to Turkana?

We always want to reach the places where life is most difficult for children, where people are suffering the most. In Kenya that is in Turkana.

A fourth failed rainy season means crops aren’t yielding and animals are dying. It is a region on the verge of famine.

How has the global food shortage affected the work of Mary’s Meals?

From the beginning, Mary’s Meals has partnered with communities in each country, to make school-feeding programs a locally-managed solution that is cost-effective, replicable and sustainable. Each school program is delivered by volunteers who help source, cook, and serve the daily school meals.

Around the world, as much as possible, we want to use locally-grown food. We want to support the local economy and support the farmers.

How can readers help support the vitally important work of Mary’s Meals?

The global hunger crisis has made the Mary’s Meals mission of feeding children where they learn critical. The increasing price of food and fuel means that the cost to feed children is rising rapidly.

I ask people to help us keep the promise we have made to more than 2.2 million children already receiving our meals. They can do that by visiting marysmealsusa.org and as always, we are thankful for that support.