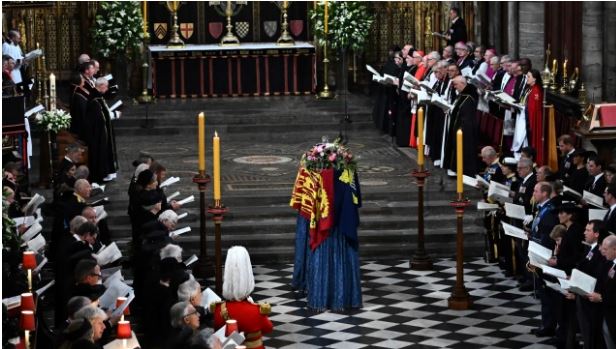 Take a look at how Catholicism was incorporated into the British sovereign’s moving funeral.

As the world watched the majestic funeral of the Anglican queen, Elizabeth II, certain details and influences of the Catholic faith did not go unnoticed.

While St. Peter’s Collegiate Church (the former name of Westminster Abbey) may now be a Church of England site, it was founded by St. Dunstan and King Edgar and it was home to Benedictine monks until Henry VIII’s dissolution of the monasteries.

The abbey is dedicated to St. Peter, the Church’s first bishop of Rome. And while the Anglican Church believes the monarch to be the head of the church, it is interesting to see the very first pope has such a prominent role in the abbey.

A Catholic to start the readings

Baroness Janet Scotland gave the first reading from 1 Corinthians: “Oh grave, where is thy victory?” The Catholic baroness was born in Dominica to a family of 12 children. She emigrated to Britain when she was 2 years old. While she joined the government and became a member of the British cabinet, and a member of the House of Lords, she is now secretary general of the Commonwealth of Nations — an organization dear to the Queen’s heart.

Seeing the Black Catholic take center stage in the prayerful service was meaningful not only to the Baroness’ Caribbean home country, but to Catholics everywhere.

A cardinal prays at the funeral

King Charles III has been very open about the importance of having an ecumenical and interfaith dialogue. So the fact that Cardinal Vincent Nichols of Westminster was invited to take part in the funeral — the first Catholic clergyman to be involved in any royal funeral for centuries — was a huge sign of the new-king’s determination to create some unity among all the faiths of his kingdom.

Cardinal Nichols, president of the Bishops’ Conference of England and Wales, was asked to lead one of the prayers of intercession, asking God for a “spirit of mutual honor and respect.”

The United Kingdom’s Catholic leaders were also present at the funeral: for Scotland, Archbishop Leo Cushley of St. Andrews and Edinburgh; for Wales, Archbishop Mark O’Toole of Cardiff; and the Vatican’s foreign minister, Archbishop Paul Gallagher, was there to represent Pope Francis (Cardinal Pietro Parolin, Vatican Secretary of State, who would normally represent the pope, was already in New York, where he will speak at this week’s UN General Assembly).

Considering no Catholic prelates were present at the funeral of the Queen’s father, George VI, the inclusion of Cardinal Nichols in the service was particularly meaningful. As the Queen’s former Anglican royal chaplain to Queen Elizabeth, Gavin Ashenden, who converted to Catholicism in 2019, shared, according to OSV:

“Seeing Cardinal Nichols standing by the high altar dressed as a cardinal during the queen’s funeral service gave birth to a complex mixture of emotions, amongst which joy and nostalgia were combined.”

Sir James MacMillan, who was knighted by the Queen herself, was chosen to provide a setting of “Who Can Separate Us?,” a text from the Letter to the Romans that was sung as the final anthem. The composition by an eminent Catholic composer is a particular honor that will go down in history.

As the Queen made her way to her final destination, St. George’s Chapel in Windsor, the beautiful “Skye Boat Song” was played by the pipers. The song itself is about the Catholic Bonnie Prince Charlie’s escape from government troops to the isle of Skye after the Battle of Culloden in 1746. The last of the Scottish Stuarts, he tried to regain the throne for the Catholics but lost. Had he won his claim to the throne, he’d have been Charles III.

If you tuned into the committal ceremony that took place at Windsor after the funeral, you’ll have noticed a more intimate atmosphere. And in the chapel steeped in history, the moving Night Prayer by St. John Henry Newman, an Anglican priest who became a Catholic cardinal, was included:

O Lord, support us all day long,
Until the shadows lengthen
and the evening comes,
and the busy world is hushed,
and the fever of life is over,
and our work is done.
Then in your mercy,
grant us a safe lodging and a holy rest,
and peace at the last. Amen

The presence of a King Charles

This is totally pushing it, but it’s interesting to note that the two former kings with the new sovereign’s name, Charles I and Charles II, were both tied to the Catholic faith. While Charles I certainly sympathized with the Catholics, and even married one, Charles II converted to Catholicism on his deathbed. So who knows what is in store for the new Charles III!