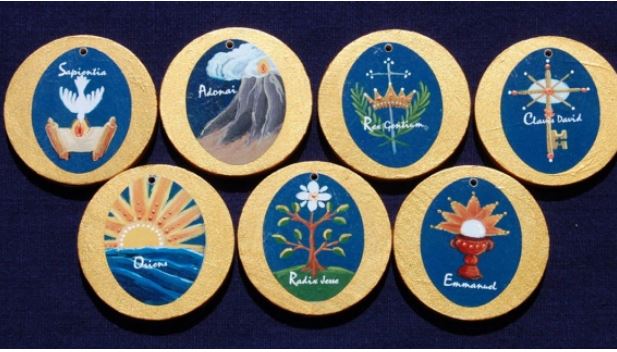 Since the 8th century, these chants have been sung at the beginning of the Magnificat each evening from December 17 through December 23.

The season of Advent is full of mystery and anticipation. During these weeks, the Church’s liturgy leads the faithful patiently, yet deliberately, through the prophecies of the Old Testament, particularly the prophet Isaiah, to the silence and beauty of the Nativity. Our incarnate Lord, lying in a manger, wrapped in swaddling clothes, is the fulfillment of all hope, and these last days of Advent are ushered in by the great O Antiphons –– seven antiphons, or short chants, that are sung at the beginning of the Magnificat each evening at Vespers (Evening Prayer) from December 17 through December 23.

The O Antiphons have been chanted in the Church since at least the 8th century. There are many levels to the symbolism and foreshadowing of the antiphons. Individually, they each speak on their own, addressing our Lord by a different title or name given to him in Old Testament prophecies, imploring him to come and save his people. These antiphons are called the “O Antiphons” because each chant begins with great cry, “O …” :

Collectively, they speak too. Looking at the titles, we find an acrostic. Taking the first letter of each antiphon, working in reverse, we see the Latin words ERO CRAS. Literally, these words translate to, “Tomorrow I will be,” or perhaps more appropriately for Advent and the impending Nativity, “Tomorrow I will come.”

The text of each antiphon is scriptural and prophetic—the words of the chant are all based on passages from Isaiah that introduce us to the coming Christ-child. It seems every Christian knows the hymn setting of the O Antiphons: “O Come, O Come Emmanuel.”Over the next seven days of Advent we will dive into each of these antiphons with the help of the pope and outstanding preacher, St. Leo the Great (d. 461), whose 21-year pontificate Pope Benedict XVI called, “Undoubtedly one of the most important in the Church’s history.”

No matter the form in which we know the antiphons, these remaining days of Advent should—with the help of these beautiful and ancient chants—draw our minds and hearts to the King of Kings as we explore our Catholic tradition and prophecy from of old, joyfully awaiting  the coming of our Savior.