The Holy Angels Through the Eyes of Eastern Christians 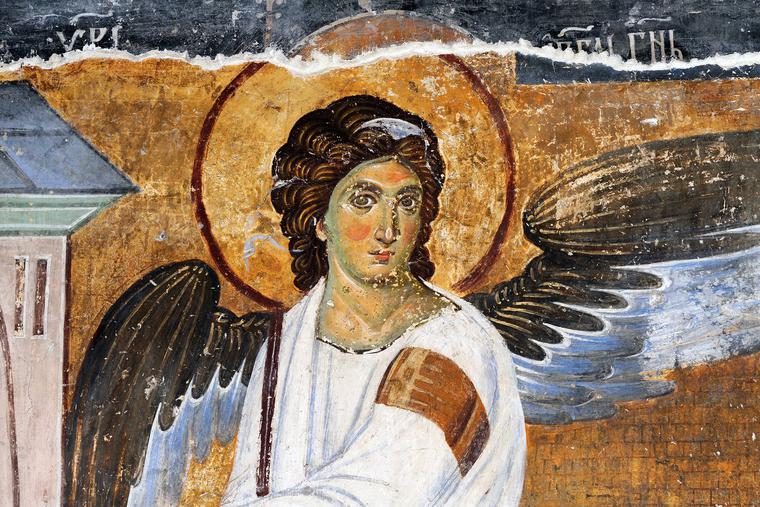 We sojourn with the holy angels on our path to holiness, where they urge us on and assist us with great power.

Our world has a love/hate relationship with the invisible realm. On the one hand, our scientism and materialism will not suffer talk of anything that cannot be measured and manipulated. On the other hand, there is a growing acceptance of alternative systems of belief, including growth in witchcraft and the occult. The ongoing war in Ukraine, the hostility sparked by the overturn of Roe v. Wade, and recent mass shootings all demonstrate a demonic influence and hatred for life itself.

With all of this occurring right before our eyes, we ought to be imploring the holy angels for their protection and guidance. This article is meant to be a brief catechesis on the Eastern Christian perspective on the holy angels. The more we know and love the holy angels, the more we will call on them unceasingly for help!

An Overview of Angelic Belief

The East’s approach to the angelic beings is very similar to the West. Our shared belief is rooted in both the Old and New Testaments. We both recognize the importance of the angels in the life of Our Lord. It was an angel who approached Our Lady at the Annunciation. Choirs of angels who sang out at his birth. Angels who ministered to him throughout the time of his public ministry. And, it was an angel who first announced “He has been raised!” (Matthew 28:6). St. Paul distinguished, for the early Christians, the various types of angels. He writes, “For in him all things in heaven and on earth were created, things visible and invisible, whether thrones or dominions or rulers or powers — all things have been created through him and for him” (Colossians 1:16). Later, he warned against the dangers of worshiping angels (see Colossians 2:18).

The early Church Fathers took this rootedness in Sacred Scripture and made certain helpful distinctions in understanding the invisible realm. The first distinction pertains to God himself who is uncreated. Everything that exists outside of the uncreated divine nature is created ex nihilo (out of nothing). Invisible created nature pertains to the angelic realm — this refers to both angels and fallen angels (the demons). God created the angels for goodness and holiness but the demons became demons of their free will. The last distinction is the visible created nature — this is man. Only man walks between both realms of the visible and invisible. The visible through our material body, and the invisible through the human soul.

An early Church Father, pseudo-Dionysius, was one of the only Fathers to write directly on the angelic world. His work, The Celestial Hierarchy, gives us the traditional nine orders (choirs) of angels: Seraphim, Cherubim, Thrones, Dominions, Powers, Authorities, Principalities, Archangels and Angels. Each order of angels is named according to its function. For example, the Seraphim are “fire-makers” or “carriers of warmth” and the Cherubim are “fullness of knowledge” or “outpouring of wisdom.” These names demonstrate their particular God-given divine gift that is connected to their mission.

Building on Dionysius, St. Maximos the Confessor teaches that each order of angels illumines the others through the sharing of their experiences of God. He writes (One Hundred Texts on Love 3.33):

As regards their virtue, they communicate a goodness which imitates the goodness of God, and through this goodness they confer blessings on themselves, on one another, and on their inferiors … making them like God.

The charity of the angels in their mutual support in growth in holiness mirrors the Church on earth and the mutual support of fellow believers. St. John Climacus (Ladder of Divine Ascent 26) comments:

Love has no boundary and both in the present and in the future age we will never cease to progress in it as we add light to light … even the angels make progress and indeed they add glory to glory and knowledge to knowledge.

Angels and man are coworkers in the growth of love toward God.

The Fathers also attest to the unique position of man in regard to the angels. Only man is made in the image of God. It is this image that Christ assumed in taking on our human nature. It is for hatred of this that the devil fell. It is for this reason the demons make war on us even to this day. St. Gregory Palamas (Natural Chapters 43) said:

Although the angels are superior to us in many ways, yet in some respects — as we have said and as we will repeat — they fall short of us with regard to being in the image of the Creator, for we, rather than they, have been created in God’s image.

Even though we still bear God’s image to a greater degree than the angels, yet as regards the likeness of God we fall far short of them.

Another unique aspect of the temporal time that man is blessed with is that he is able to exercise human freedom numerous times. We know that at some point after their creation, the angels were given a single choice for or against the will of God. Those who chose for God remained in goodness and holiness, whereas those who chose to disobey became demons. This choice locked in the angelic/demonic fate. Man, however, exercises moral choice countless times throughout his life. At a moment he can choose to return to God or to reject him. This exercise of freedom in multiplicity imitates the ultimate freedom of God.

Angels, while bodiless, can take on a form when they are commanded to do so. Angels appear frequently throughout the Old and New Testaments. They are described as “swift” or “quick” by St. John Damascene. Unconstrained by a physical body, angels may “appear immediately in whatever place the divine pleasure commands” (St. John Damascene, Exact Exposition 1.13). This immediacy of their appearance, however, is confined to a single space. Angels are not omnipresent. Their unconstrained nature does allow them to communicate without language. Damascene says “they communicate their individual thoughts and designs to one another without having recourse to the spoken word.”

Regarding their knowledge, they have no need for deliberation or deduction. Dionysius states, “They think the thoughts of the divine realm … immediately, and in a single act” (The Divine Names 7.2). Additionally, angels are not holy by nature — rather, they receive their holiness from God. St. Basil the Great explains (On the Holy Spirit 16.38):

The angelic powers are not by their own nature holy; otherwise there would be no difference between them and the Holy Spirit. Rather, they are sanctified by the Holy Spirit in proportion to their excellence.

A particular glory of the Eastern Church is the highlighting of the angelic powers in worship. The angels never cease to worship the Holy Trinity, this is why the priest rightly commemorates the holy angels during the Proskomide (Liturgy of Preparation) before the Divine Liturgy. The angelic powers are commemorated after the Theotokos (excellent company indeed). The angels are also invoked liturgically during the prayer of the Entrance of the Gospel (the “little Entrance” is a procession with the book of the Gospel), the Cherubic Hymn (before the Anaphora/Eucharistic prayer), and during the Anaphora itself. The Anaphora of St. Basil proclaims:

Hosts of archangels, and tens of thousands of angels wait upon thee, the many-eyed Cherubim and the six-winged Seraphim that soar aloft … And with these blessed Powers, O Sovereign Lord and friend of man, we also cry aloud and say: Holy and most holy art thou, and thine only-begotten Son, and thy Holy Spirit.

Additionally, the vestiture of the deacon during the Divine Liturgy with the orarion (stole), symbolically represents the wings of the angels. His diaconal ministry is a ministry of intercession as he moves from the sanctuary (Heaven) to the nave (Earth) and offers the intercessory litanies.

Many saints of the Eastern tradition have attested to the ministry of the angels at the earthly altar. In the Philokalia,we read an account of Abba Philimon who was filled with fear during the Divine Liturgy at the sight of the Church being filled with the holy angels. A contemporary Orthodox elder (Iakovos of Evia) described how he was so filled with fear at the sight of the angels that they had to push him to make the Great Entrance (with the holy gifts). There are numerous attestations of the ministry of the angels at the Eucharistic liturgy — they truly worship with us!

A major feast of the Eastern Churches is the Synaxis of the Leaders of the Heavenly Host (Nov. 8). The day is celebrated with an all-night vigil, with a Vesperal procession and a Gospel reading, and with oil and wine permitted if it falls on a day of fasting. It is also a day wherein the Church prescribes us to rest from work, testifying to the solemnity of the day. Additionally, every Monday in the Byzantine Churches is dedicated to the holy angels. Prayers are offered to the guardian angels for protection for travel and every service of Compline concludes with a prayer to our guardian angel.

The angels are oft overlooked. We have images of round-faced naked babies with wings as depictions of the angelic beings. This does the Christian little service. The angels are powerful. They are commanded by God himself and they do as he commands. We sojourn with them on the path to holiness. They urge us on and we strive to imitate their likeness to God. They worship with us ministering at the altar of God in an invisible way. The angels are genuinely magnificent gifts and underused and underappreciated within our current Catholic ethos. In this age of increasing toxicity and hatred against the very foundational gift of life itself, we ought to be invoking the protection and intercession of the bodiless powers of Heaven with greater fervor.

(Note: The content of this article is heavily influenced by the work of Harry Boosalis and his book entitled Angels and Demons and inspired by Father Daniel Dozier and Father Deacon Anthony Dragani. The source materials can be found in Migne’s Patrologia Graeca.)

Robert Klesko Robert Klesko is an EWTN Theology Advisor, married to Aundrea with five boys and one girl, and is in diaconate formation for the Byzantine (Ruthenian) Catholic Church. He writes from Irondale, Alabama.