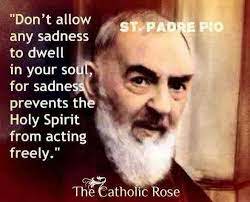 Here’s a sneak peek of the faith-filled movie, which is slated to be released on September 9.

This has been a bumper year for bringing the Catholic faith to our screens. Not only have we been edified by Jonathan Roumie in The Chosen, we’ve also had the opportunity to learn about the inspiring Fr. Stuart Long, in the movie Father Stu, starring Mark Wahlberg.

And now as the year draws to an end, the highly anticipated Padre Pio, starring Shia LaBeouf as the lead, and directed by Abel Ferrera, is due to open in movie theaters beginning September 9.

Considering LaBeouf’s own checkered past, which includes serious allegations of assault, he may seem an unlikely choice to play such a beloved saint. However, it seems that St. Pio of Pietrelcina used his saintly ways to bring LaBeouf home, with the actor converting to Catholicism while portraying the famous friar.

In the short trailer we can already see the actor’s convincing depiction of the much-admired friar. Although the cast, including Marco Leonardi, Salvatore Ruocco, and Luca Lionello, is mainly Italian, LaBeouf refused to adopt an Italian accent for the role. According to his interview with Bishop Barron, the movie had become so personal to him that he didn’t want to wear a “mask.” And his decision appears to work as he seems to capture the spirit of Padre Pio beautifully.

In the short trailer, the viewer gets a spine-tingling glimpse of Padre Pio’s life and the challenges he had to contend with as a stigmatist while a world war raged. Here you can take a look at the trailer, along with a short clip to get you in the mood for what will no doubt be an epic movie about faith and the life of a remarkable saint.