Virus-Prodded Online Masses Have Changed Many Catholic Parishes — Are They Keeping Some Catholics From Returning to Church? 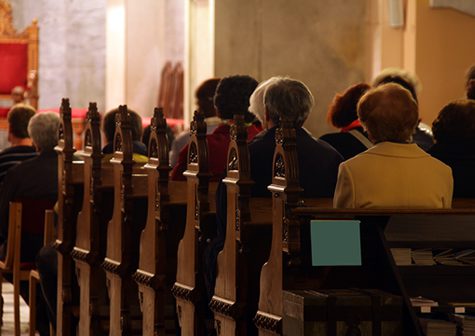 While online liturgies were a blessing early in the pandemic and continue to provide benefits for parish ministries, some pastors who spoke with the Register expressed concern about the impact over time.

During COVID times, livestreamed Masses have been a blessing to many.

And whether the new Delta variant spikes or fizzles in the coming weeks, coronavirus has already changed many Catholic parishes in the United States.

Consequently, for some formerly low-tech churches, high-tech is here to stay.

At the same time, Church leaders are emphasizing that getting back to in-person Mass is imperative, to partake in “the Eucharistic sacrifice, which is the fount and apex of the whole Christian life” (Lumen Gentium, 11). And while bishops and parish communities are welcoming the flock with open arms, concern is being expressed that online worship may be having a detrimental effect on the willingness of some of the faithful back to return to their parish churches.

But providing livestreamed Masses for those who cannot attend in person, due to health concerns and other serious reasons, is likely to remain a mainstay on Catholic worship for some time.

Our Lady of Grace Church in Indian Land, South Carolina, had no livestreaming when the coronavirus lockdowns hit in March 2020. So, for about six weeks, the pastor’s Masses were captured for an online congregation using an iPad.

“It was pretty bad. But it was something,” said Father Jeffrey Kirby, the pastor, in a telephone interview this month. “When the lockdown happened, it was important to me that the people of the parish see me, their priest, at their parish altar in their parish church.”

A year and five months later, the church has three cameras, a high-quality microphone, a soundboard, a production room — and 21,800 subscribers to the parish’s YouTube channel, Grace Lily Productions. Our Lady of Grace won a nationally competitive Parish Excellence Award in November 2020 for its technical performance.

The virus emergency not only changed the way the parish communicates with parishioners, it has even led it to unexpectedly develop a second constituency, as far-flung as California to the west and Ireland to the east.

Closer to home, the pastor said he sees an uptick in participation among parishioners in Bible study and novenas, which are also carried live online and which are key to the elusive formation of Catholic adults.

“It has really just provided an enhanced ability to participate in the life of the parish. We’ve seen a lot more people engaged,” Father Kirby said. “That has always been the great struggle: getting adults to learn more about their faith and go deeper into their faith. And now we’re seeing success in that area we’ve not seen in the past.”

The parish’s director of operations used to oversee the church’s facilities and determine which groups could use which rooms and when. Now, he spends all his working time overseeing livestreaming of key parish activities.

Over time the gradual-yet-steady equipment upgrades have cost about $100,000, Father Kirby said — all paid for by donors from elsewhere in the country who have sent donations without being asked. This past June the parish started offering “grace swag” in the form of coffee cups and T-shirts as a way of saying thank you to donors to the online operations.

Not Your Father’s Way of Joining a Parish

Cameras aren’t new at St. Monica’s Church in Santa Monica, California, where at least one Sunday afternoon Mass has been carried live online for about 10 years. But when California imposed the most stringent lockdown in the nation last year — at one point not allowing anyone in the church building for Mass except the priest — the parish started livestreaming all of its Masses. Staff also found creative ways to maintain participation. Lectors and members of the choir taped their portions of the Mass at home, which were mixed in to livestreaming using a second production room at the church.

The result is an engaging visual and audio production that has found a steady audience,

“It allowed us to continue to have a relationship with our community. And that’s the blessing,” said Msgr. Lloyd Torgerson, pastor of St. Monica’s, by telephone. “It kept us alive, and it kept us connected, because we were in their homes.”

Production values help make the connection. The church uses four cameras, which allows for varying angles and perspectives that give the viewer a lot to look at and maintain interest. The sound quality of the videos is flawless. To the left of the altar and behind it is a flatscreen that allows people in the church and watching online to see members of the choir, even if they aren’t present.

The cameras are small, out of the way, and operated by remote control.

“We didn’t want to drop big television cameras into the sanctuary. We really wanted them to be hidden and not disrupt the Mass at all, because of our liturgical sensibilities first,” said Merrick Siebenaler, director of strategic communications for the parish, who is involved in the production.

The parish routinely gets about 5,000 “hits” a week online; on Easter Sunday 2020, it skyrocketed to 60,000, the pastor said. Some far-away viewers have even joined the parish’s celebration of Mass, A person who lives near Dublin, for instance, joined the choir — which was possible because the choir was singing from their homes — and plans to join the parish on a pilgrimage to the Holy Land in February 2022.

A family who left the parish when the father got a job in Denmark — which is about 5,500 miles to the northeast — stayed in touch online during the virus, to the point where a child in the family has taken religious-education classes through St. Monica’s and is planning to travel back to the church this fall to receive first Communion.

Father Gary Zerr has heard exasperating comments concerning online Masses, including one from a young-adult parishioner at St. Edward’s Church in Keizer, Oregon, who said he likes the virtual option because he prefers having coffee and doughnuts while watching Mass.

But Father Zerr, the pastor of St. Edward’s, said he has seen more uplifting examples from virtual interaction, including cases of people finding the Mass online as a means to finding their way back to their faith. The church is now getting almost as many online viewers of Mass as the people who come in person, which itself is more than came before the virus, he said.

Mass isn’t the only draw. Two Family of Mary missionaries from central Europe got trapped on the West Coast last year during the virus travel restrictions and took to livestreaming Holy Hours at St. Edward’s. They got a good reaction, the pastor said.

When St. Edward’s opened in 2013, someone donated expensive camera equipment that went largely unused. But when the virus hit, Father Zerr felt like he knew why the equipment was there.

Overall, he said, online Mass is a major positive.

“I know some local pastors in the diocese are worried that people won’t come back, but I’ve had the exact opposite experience. We’ve found a lot of people have come back to church because of the livestream,” Father Zerr said. “There’s much more good than bad coming out of it. So we’re going to keep going.”

No Substitute for The Real Thing

Not receiving Communion is the stumbling block when it comes to online worship. While the “Act of Spiritual Communion” prayer written by St. Alphonsus Liguori during the 1700s became popular last year, it does not replace the Eucharist — the “source and summit” of the Catholic faith, according to the Catechism of the Catholic Church — because sacramental Communion can only be received in person.

In-person attendance at Mass has decreased nationwide during the pandemic. A Gallup poll released in June 2021 found that church attendance is down about 23% among Catholics in the United States since before the pandemic — from 37% in 2019 to about 30% in 2021.

Priests interviewed for this story agree that online Masses are a Godsend for shut-ins, nursing-home residents and people with compromised immune systems. But what about relatively healthy people who aren’t coming to church the way they used to?

At Father Torgeson’s California parish, for example, in-person Mass attendance remains only about half of what it was before the virus. In South Dakota, churches were shut down only two months last year — from March 15 to May 15. Yet church attendance in Sioux Falls, the largest city in the state, is down about 20% since then, said Father Charles Cimpl, pastor of the city’s Holy Spirit parish.

During the shutdown he taped weekend Masses for later streaming on YouTube. But he stopped after churches reopened. Like some other priests, he worries that relying on their laptop became a habit for former churchgoers.

“I think people got pretty comfortable with that. It was just a concern — they just did not feel the need, apparently, to come back,” Father Cimpl said. “I don’t know even if we got a lot of those people to return yet. In our city of Sioux Falls, we’re still experiencing that some of the people have not returned.”

‘Come Back to Receive Jesus’

Msgr. Nalty is livestream-friendly — he sits on the board of the local television station that produces online Masses at the city’s cathedral and at St. Stephen Church, which is one of the two churches in Good Shepherd parish, which he serves as pastor.

Yet for the 6:30am Mass on Monday through Friday, he doesn’t want people rolling out of bed and plopping down in front of a computer screen if the church is open and available.

Matt McDonald is the editor of New Boston Post and a National Catholic Register correspondent.