What Padre Pio can teach us about feeling unworthy 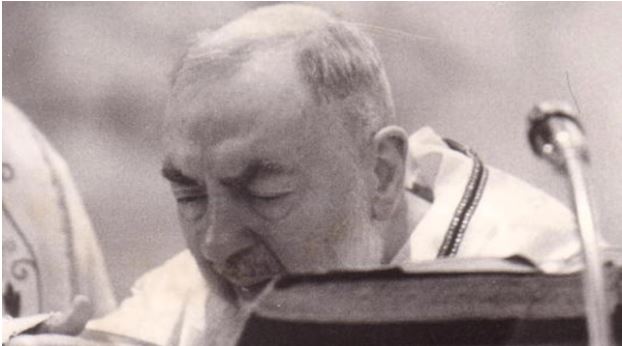 If we act like the person we want to become, we live our way to a holier life.

Like all of you, I hold in my mind a vision of who I would like to be. Most mornings, while the crickets sing in the pre-dawn, I slip out the door with my road bike, tuck a few necessities into my jersey pockets, and roll along deserted, tree-lined city streets on my way to early Mass. Some days, the cadence of the pedal strokes softly carries me, peaceful and calm. Other times, it’s more like hunting, searching, escaping.

A few mornings ago, fog rose from the soccer field of the neighborhood park, the same field of grass where I’ve sat many an hour watching my children whoop and dance with their friends while a hapless coach tried to organize them into a proper drill to kick the ball. Like incense, the fog sanctified a scene that both revealed and concealed the backdrop of my daily pilgrimage.

In some sense, I know exactly what my place is in this world and who I mean to be – a husband, father, son, friend, priest – and I know how much I desire to be patient and kind, to think of others before myself, to find the right word to say to those who need to hear it.

In another sense, though, I have no idea how I’m doing at defining and fulfilling this personal vision. If I’m not yet the person I want to be, I wonder how I’m supposed to get there. It’s all a haze rising from blades of grass and taken into the sky, an ever-shifting horizon of self-knowledge, of choices made and unmade.

My little cycling journeys are precious even if some mornings they’re unsettling. The Mass is also a type of journey, one in which we accompany Christ through his Passion, death, and resurrection. The actor Shia LaBeouf, in describing his experience of attending the Mass, recently said that it feels like, “being let in on something that is very special.”

I feel that specialness, and in many ways I feel unworthy, both of the daily bicycle ride and the Mass. I’m not quite sure what entitles me to experience either. I’m puzzled that God tolerates my presence.

LaBeouf had encountered the Mass because he’s an actor who was learning to play the part of Padre Pio for a movie. In preparation, he watched the Mass. He had a priest explain to him how to act like a proper priest saying the Mass. He dressed the part. Learned the Latin. He acted it out. The funny thing is, over time, his acting took on an aspect of reality. The Mass became real. It took him on a journey and changed his life.

Perhaps, as we contemplate the struggle to grow into the very good, very devout, very happy self-images we create for ourselves, it’s less about becoming worthy and more about simply showing up. Padre Pio himself, after all, wrote in a letter, “People who are or choose to be unworthy never have fear about being unworthy.” The point is, I suppose, that even if we feel unworthy of the perfect picture we’ve composed for our lives, we shouldn’t let that fear keep us away. Even if you’re afraid, you act the part until it becomes real.

As he aged, Padre Pio’s vision became so weak that he couldn’t read the Mass prayers in the Missal anymore. However, he had memorized the Mass of the Dead and received permission from his superiors to pray it every day because he knew the words. He often fell into long silences during his Masses, not because he’d forgotten the words but because he became lost in thought, particularly in praying for all the souls in purgatory. He prayed that they would progress into the fullest version of themselves and enter Heaven, happy and strong.

People didn’t like those long silences; even other priests complained. I wonder if those complaints ever made Padre Pio feel that he was a fraud. Maybe he was saying Mass wrong. Maybe he was unworthy. Or maybe he always understood with that fiery confidence of his that, even if he wasn’t perfect, in making that daily journey of the Mass he had been let in on something very special.