What St. John the Apostle Did When He Met a Fallen Away Christian 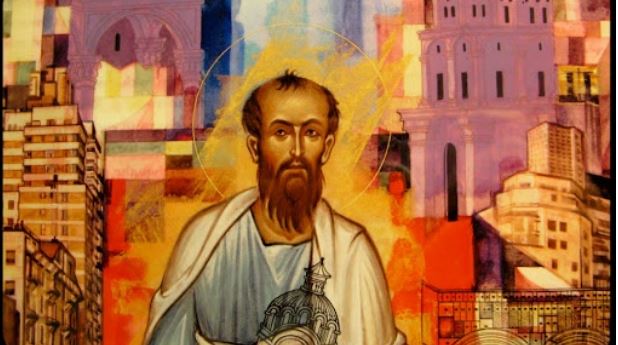 He sets a high bar for his successors, the bishops – and shows us all the worth of a lost soul.

While chasing after a “sinner” on the rooftops of the Vatican, Pope Francis reportedly took “a shortcut around the Tower of Nicholas V and tackled the unnamed blasphemer from behind, sending them both crashing through a 15th-century stained glass window and directly into a confessional booth below.”

We all knew Pope Francis was awesome – but this awesome? You can read the full account of the action-packed chase, complete with a photo of the chase in progress, over at The Onion. (Translation: it’s made-up and just for fun.)

This satire reminds me of an amazing real-life story about St. John the Apostle, as recorded by the 4th century bishop Eusebius in Book III, Chapter 23 of his seminal work Church History.

“Listen to a tale, which is not a mere tale,” Eusebius begins, “but a narrative concerning John the Apostle, which has been handed down and treasured up in memory.”

John has just returned from exile on the island of Patmos and is busy traveling around ordaining bishops. In one town, he takes particular concern for the spiritual welfare of one of their young men and exhorts the local bishop, “This one I commit to you in all earnestness in the presence of the Church and with Christ as witness.” The bishop agrees, and John heads home to Ephesus.

The bishop gives one of his presbyters (or, priests) the task of watching over the young man, who instructs him and baptizes him. But, misjudging that the young man is now strong in the faith, the presbyter pre-maturely relaxes his discipline. That’s when things start to go down hill.

Enticed by “costly entertainments,” the young man gets in with a bad crowd who persuades him to commit robbery with them.

But he still has some conscience. He knows that what he is doing is wrong, but unfortunately, knowing how great his crimes are, begins to despair of God’s mercy. Figuring he is now lost forever, he throws himself deeper into their illicit activities and, as Eusebius describes it, becomes “a bold bandit-chief, the most violent, most bloody, most cruel of them all.”

Some time later, John is visiting the church again and asks the bishop, “Come, O bishop, restore us the deposit which both I and Christ committed to you, the church, over which you preside, being witness.”

At first the bishop is confused, thinking John is referring to money, but John clarifies: “I demand the young man and the soul of the brother.” The bishops bursts into tears, and confesses to John, “He is dead, dead to God. For he turned wicked and is now a robber. And now, instead of the church, he haunts the mountain with a band like himself.”

John, according to Eusebius, “rends his clothes, and beating his head with great lamentation” cries out, “A fine guard I left for a brother’s soul! But let a horse be brought me, and let someone show me the way.” And John rides off at once to the robber’s outpost.

When he gets close, he is taken prisoner by some of the robbers. He doesn’t resist but just demands to meet their leader.

The young man is standing armed when John approaches, but when the young man recognizes John, he turns “in shame to flee.”

Then, John, who may have been in his 70s or 80s, “forgets his age, pursues him with all his might,” and shouts after him,
“Why, my son, do you flee from me, your own father, unarmed, aged? Pity me, my son; fear not; you have still hope of life. I will give account to Christ for you. If need be, I will willingly endure your death as the Lord suffered death for us. For you will I give up my life. Stand, believe; Christ has sent me.”

The young man stops and looks down, then throws away his weapons and begins to “tremble and weep bitterly.” As John embraces him, the young man confesses his sins, “baptizing himself,” as Eusebius puts it, “a second time with tears.”

I’ll let Eusebius tell the rest of the story:
“John, pledging himself, and assuring him on oath that he would find forgiveness with the Saviour, besought him, fell upon his knees, kissed his right hand itself as if now purified by repentance, and led him back to the church. And making intercession for him with copious prayers, and struggling together with him in continual fastings, and subduing his mind by various utterances, he did not depart, as they say, until he had restored him to the church, furnishing a great example of true repentance and a great proof of regeneration, a trophy of a visible resurrection.”

I encourage my readers to pray for our bishops, that they, as successors of the Apostles, would have the wisdom and courage (and athleticism?) to follow after the example of John. And then let us all pray the same for ourselves.

Brantly Millegan is Assistant Editor for Aleteia. He is also Co-Editor of Second Nature and Co-Director of the International Institute for the Study of Technology and Christianity. He is finishing up a M.A. in Theology at the St. Paul Seminary School of Divinity and will begin working on a Ph.D. in theology at the Catholic University of America this fall. He lives with his wife and children in South St. Paul, MN. His personal website is brantlymillegan.com.

Give the gift of Aleteia this Christmas. Share our newsletter with a friend or invite them to sign up here. (It’s free and will arrive to their email inbox every morning.)