What’s the difference between the Apostles’ Creed and Nicene Creed? 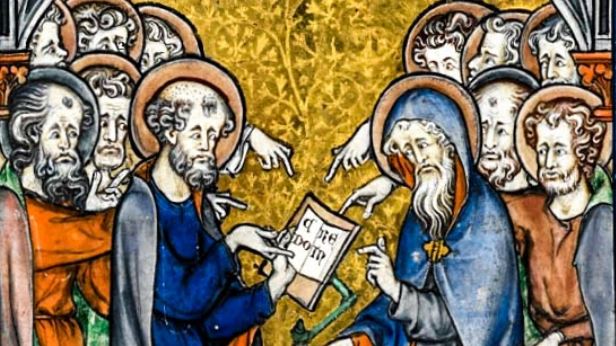 Or, as they are commonly referred to, the “short Creed” and the “long Creed.”

When attending Mass on Sundays and Holy Days of Obligation, the congregation joins together in reciting a Profession of Faith after the homily. This is also known as the Creed, from the Latin word credo, meaning “I believe.”

The General Instruction of the Roman Missal explains the purpose of the Creed embedded in the Mass.

The purpose of the Creed or Profession of Faith is that the whole gathered people may respond to the Word of God proclaimed in the readings taken from Sacred Scripture and explained in the Homily and that they may also honor and confess the great mysteries of the faith by pronouncing the rule of faith in a formula approved for liturgical use and before the celebration of these mysteries in the Eucharist begins.

In other words, the Creed is a much longer “Amen” to everything that was said in the Liturgy of the Word and an affirmation of what is about to unfold in the Liturgy of the Eucharist. It is a personal and collective assent, proclaiming to all present that you believe in the foundational beliefs of the Catholic faith.

The Church, in her wisdom, has selected two different Creeds that can be recited during the Mass: the Apostles’ Creed and Nicene Creed. The instruction in the Missal states, “Instead of the Niceno-Constantinopolitan Creed, especially during Lent and Easter time, the baptismal Symbol of the Roman Church, known as the Apostles’ Creed, may be used.” The decision of which Creed to use is up to the priest and local bishop.

Both Creeds are ancient and have roots that can be traced to the very beginnings of the Church.

The Nicene Creed is strictly speaking the “Niceno-Constantinopolitan Creed” and was first developed following the First Council of Nicaea in 325. It was held to combat a theological error called Arianism (from its principal proponent, a priest named Arius) that denied the divinity of Christ. A Creed was developed to affirm the teachings of the Church and was further refined at the First Council of Constantinople in 381. It expanded on previous Creeds in order to be more precise in what the Church believed.

Before the Nicene Creed there existed many other early Creeds, often called a symbolon in Greek. According to Edward Sri, a symbolon had great meaning in the ancient world.

In the early Church, Christians described their Creed, their summary statement of faith, as the symbolon, the “seal” or “symbol of the faith.” In the ancient world, the Greek word symbolon typically described an object like a piece of parchment, a seal, or a coin that was cut in half and given to two parties. It served as a means of recognition and confirmed a relationship between the two. When the halves of the symbolon were reassembled, the owner’s identity was verified and the relationship confirmed. In like manner, the Creed served as a means of Christian recognition. Someone who confessed the Creed could be identified as a true Christian. Moreover, they were assured that what they professed in the Creed brought them into unity with the faith the Apostles originally proclaimed.

The Apostles’ Creed grew out of that ancient tradition and according to legend, the Apostles themselves each wrote a portion of that Creed on Pentecost. While scholars have debated for centuries the authenticity of such a claim, many believe that at the very least, a form of the Apostles’ Creed was written during the 2nd century and was based on an outline from the apostolic age.

Both Creeds essentially say the same thing, with one being more precise (Nicene) and the other summarizing the faith in fewer words (Apostles’). The purpose of each one is the same, affirming the faith and proclaiming before all what we believe.