When marriage gets tough: A must-see film clip based on Fulton Sheen’s timeless wisdom 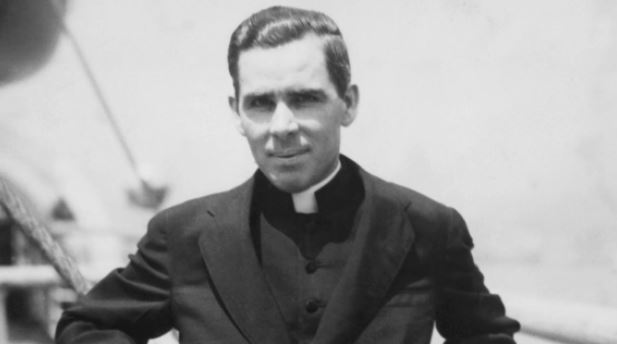 As my prayers for my husband increased, my anger toward him decreased.

Feeling like I had the worst marriage in the world, I stayed up late one night numbing myself with social media and stumbled upon this film. I watched it, mesmerized … especially by the tranquil, falling leaves, and the shots of a fire-ravaged forest.

The fire-ravaged forest fit my mood. The tranquil leaves, not so much.

My husband and I were in the middle of thesame fight we’ve had countless times during our 22 years of marriage. I was too angry to pray; too tired to cry or call a friend. I had tried all those things the last time we fought and nothing had worked. Focus on the positives, my mom or best friend would say, or things could be worse.

Their well-intentioned advice felt impotent and insulting. And yes, my husband and I have sought marital counseling as this short film recommends. Marriage counseling is incredibly helpful for all kinds of problems and it has served us immensely.

Regardless, I’m grateful the Holy Spirit led me to this clip by Thing in a Jar Productions, a group that has authored a series on the popular 1950s Catholic televangelist Archbishop Fulton Sheen.

Here are my three big take-aways:

2.  “An unhappy marriage is not a condemnation to unhappiness; It is a noble tragedy in which one bears the slings and outrages of fortune rather than deny a vow that was made to the living God.”

While this wisdom really stands alone and needs no further explanation, I would encourage readers to watch the film in its entirety and take note that this gem is placed in the center of the clip. All I know is that I felt seen when I heard Blessed Fulton Sheen speak this admonishment over me. And while some may feel the statement doesn’t bring much comfort, that part comes next.

Sheen closes with a reflection on Corinthians 7:14.

Now, my husband and I are both practicing Catholics who at least have the goal of living the faith 24/7. Yet this meditation meant so much to me, because even though we both go to Mass, pray, take part in the sacraments regularly — like most people, our belief is stronger on some days and weaker on others.

The concept that this present state of marriage isn’t so much about happiness as it is about growing in holiness, becoming sanctified, hit me in a powerful way. I was reminded of close friends who aren’t married to “believers.” I’d imagine they could relate to this consolation as well, especially as it’s directed straight at them.

The film closes as it begins, with Blessed Fulton Sheen directing the viewer’s gaze heavenward to our ultimate, eternal goal. And by the end of the night, after watching this clip a few times, I walked away from my computer feeling a fresh wave of encouragement to pray for my husband in more specific ways — about his job and things that were stressing him out and therefore affecting our relationship. And as I sat all alone in the dark I realized that as my prayers for my husband increased, my anger decreased.

Blessed Fulton Sheen, pray for us!