Who was St. Juan Diego? 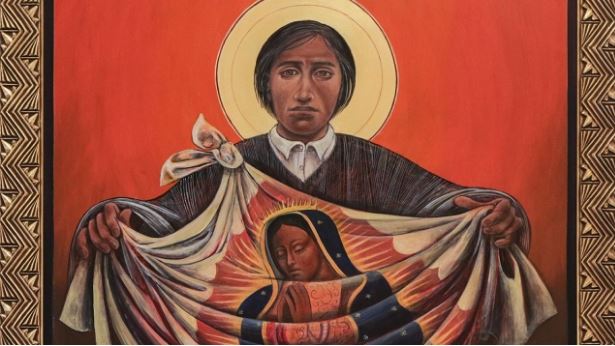 St. Juan Diego was a poor and humble lay man, who witnessed the life-changing apparition of Our Lady of Guadalupe.

While many are familiar with the ever-popular image of Our Lady of Guadalupe, not everyone knows the saint to whom she appeared in 1531.

St. Juan Diego was born in 1474 with the name “Cuauhtlatoatzin” (“the talking eagle”) in Cuautlitlán, which is today part of Mexico City, Mexico. He belonged to the Chichimeca people, a nomadic indigenous group living in the central region of Mexico.

Little is known about St. Juan Diego, but what is certain is that he was baptized between the ages of 50 and 57, along with his wife. She died roughly two years before the apparitions in 1531. It is reported that they did not have any children. A common telling of his story recounts a possible vow of celibacy, as summarized by The Month: Catholic Magazine from 1885.

He had been married but his wife died about the time of the apparitions. They had both been baptized together in 1524 and it is said that they observed perpetual chastity in the state of matrimony having been prompted to it by a sermon of the famous Padre Motolinia’s at Halteloleo, in which the angelic virtue was much eulogized.

The apparition of Our Lady of Guadalupe prompted Juan Diego to dedicate the remainder of his life to the Virgin Mary and it is said that he lived as a hermit near the church where the image was kept. The rest of his life is recalled in The Month.

The holy Indian lived seventeen years after the apparitions edifying his fellow Christians by his spirit of prayer and penance. He became, I believe at his own request, the guardian of the holy image in its first chapel on the Tepeyac and was buried there by the side of his uncle Juan Bernardino, who had died four years before him in 1544. A revelation had been made through the holy image to Juan Diego to the effect that Señor Don Fray Zumárraga, he himself, and his uncle, the three persons connected with the events of the Tepeyac, would reach eternal glory. Señor Don Fray Zumárraga died exactly the same year and month as Juan Diego. He is known as the Venerable Zumárraga.

St. John Paul II pointed out his many virtues in a decree published in the Church’s Office of Readings.

Juan Diego, moved by piety, left everything and dedicated his life to looking after this tiny hermitage and to welcoming pilgrims. He trod the way to sanctity through love and prayer, drawing strength from the eucharistic banquet of our Redeemer, from devotion to his most holy Mother, from communion with the holy Church and obedience to her pastors. Everyone who met him was overwhelmed by his virtues, especially his faith, love, humility, and other-worldliness.

St. Juan Diego remains a powerful intercessor for all lay people and in a particular way for all indigenous peoples.